Based on these results, the researchers conclude that "Americans ... maintain broad and deep concerns regarding geoengineering options for combating climate change" (p. 6).

These results contrast with previous opinion data released last fall (see Public Opinion Supports SRM Research, 10/25/2011).  Below is a summary of results from US respondents based on data provided to me by the authors of this earlier survey. 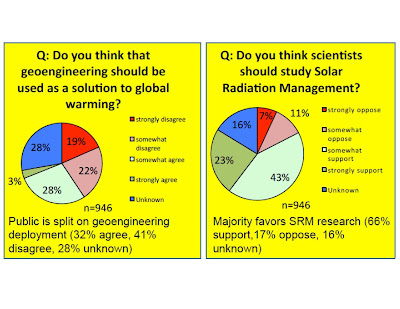 The questions posed here differ in many important respects from those posed in the Brookings survey.  The most comparable question is the first one relating to geoengineering deployment, which is most closely echoed in the Brookings question concerning "adding materials to the atmosphere."  In the earlier survey, 32% of respondents believed that geoengineering should be used and 41% disagreed (28% had no opinion), whereas in the Brookings survey, only 17% of respondents believed climate interventions would benefit the environment while 69% disagreed (14% were unsure).  However, these questions vary to such an extent that there is ultimately little utility in drawing conclusions based on any comparison.  The former question is normative ("should be used"), proposes a more specific solution ("geoengineering"), and is accompanied by an explanation of geoengineering, while the latter question is predictive ("will cause"), much more vague ("adding materials to the atmosphere"), and is unaccompanied by any discussion of geoengineering, a term which apparently was not used in interviews.  Evidence internal to the Brookings survey, i.e., framing influences, suggests that more specific language prompts more positive sentiments toward geoengineering.  Crucially, the Brookings survey asks no questions at all about geoengineering research, which elicited strong support in the earlier survey.  Overall, the new Brookings data offer less guidance on American opinions toward geoengineering than the earlier results published last year.
Posted by Josh Horton at 8:31 AM No comments:

Legislation to set up a comprehensive CCS regulatory framework has advanced through the California State Senate Committee on Environmental Quality.  The bill, SB 1139, is necessary to go forward with construction of the Hydrogen Energy California Project, led by SCS Energy, which would use CCS for EOR as part of a larger 288-MW coal and petroleum coke gasification plant.  Several legislative hurdles remain for the CCS bill.

Elsewhere, South Africa's national Cabinet has formally approved a Carbon Capture and Storage Roadmap as part of a broader package of mitigation commitments.  These commitments oblige the government to reduce CO2 emissions 34% below "business as usual" levels by 2020, and 45% below BAU by 2025, on condition that sufficient technical and financial support is provided.  A test injection is expected to follow adoption of the roadmap.
Posted by Josh Horton at 1:06 PM No comments:

The SPICE pipe-balloon testbed experiment, already delayed due to concerns about inadequate public consultation (see Lessons from the SPICE Delay, 10/15/11), has been cancelled amid an intellectual property dispute.  From the information available, it appears that two individuals involved with the project, Peter Davidson of Davidson Technology and Hugh Hunt of the University of Cambridge, failed to disclose a patent application that, although filed prior to the SPICE project proposal, posed a potential conflict of interest and violated UK Engineering and Physical Sciences Research Council (EPSRC) funding rules.  The patent application pertains to particle delivery technology related to the field trial.  According to team lead Matt Watson, "The details of this application were only reported to the project team a year into the project and caused many members, including me, significant discomfort."

Coincidentally, Davidson recently published an article on SAI balloon systems, and hosted a webinar on the subject this past Tuesday, the same day the SPICE cancellation was announced.
Posted by Josh Horton at 5:23 AM No comments:

Despite recent successes such as Britain's ambitious new CCS Roadmap (see UK Relaunches CCS Policy, 4/16) and Norway's newly-opened Mongstad demonstration project, there is growing concern within the international CCS stakeholder community that forward momentum at the global level has stalled and a critical window of opportunity for technology development may be closing (as exemplified by last month's cancellation of the Pioneer Project in Alberta--see Small Step Forward for Biochar in Australia, Big Step Back for CCS in Canada, 4/29).  Influential bodies such as the Global CCS Institute have expressed continuing frustration with the anemic rate of expansion.  For example, in the most recent update to its Global Status of CCS tracking database, the Institute declares that

Bringing early-stage demonstration projects of a complex, multi-stage, expensive technology such as CCS to a successful conclusion is difficult and time consuming.  It needs concerted, coordinated effort between governments and the private sector, and also needs the local communities affected by these projects to be fully involved in the process.  Measured progress is being made to bring such projects to fruition around the world, but concern is being expressed about the pace at which such projects are proceeding if climate goals are to be reached. (p. 4)

At the recent third Clean Energy Ministerial (CEM3) held in London in April, the Carbon Capture, Use and Storage (CCUS) Action Group reported that "Many countries have policies and mechanisms in place to support the deployment of CCS, and these actions are vitally important.  However, more needs to be done to deliver CCS at the scale and on the timeline required" (p. 1).  A more detailed report prepared by the Global CCS Institute along with the International Energy Agency (IEA) for CEM3 concludes that, "despite developments in some areas, significant further work is required.  CCS financing and industrial applications continue to represent a particularly serious challenge" (p. 3).  Another recent report by the Institute, Asian Development Bank (ADB), World Bank, and World Resources Institute (WRI) calls for donors to provide an additional $5.2 billion to help jump-start CCS activities in developing countries.

Policy support is clearly inadequate across all aspects of the CCS technology platform, from different links in the CCS chain (capture, transport, and storage) and different applications (power generation versus industrial) to unresolved regulatory issues such as long-term liability, public acceptance, and (carbon) price uncertainty.  What is most lacking, arguably, is money.  CCS technology is expensive, due in large part to its associated energy penalty of 10-40% (i.e., 10-40% of the power generated by a plant equipped with CCS is needed solely for operating CCS).  It is imperative to drive down CCS costs, which requires significant investments in demonstration plants in order to achieve technical innovations, process improvements, and economies of scale.  Yet current political and commercial considerations preclude large-scale public or private investments in CCS.  Put simply, CCS needs more money now to cost less in the future, and there is every reason to expect that this money will not be forthcoming.

One possible way around this impasse would be for governments to mandate a performance standard for some fraction of the generation fleet such that compliance effectively requires the addition of CCS.  By adopting an indirect equipment standard in this manner, applicable to some mix of old and new coal and gas plants, generators would be forced to develop cost-effective CCS systems and technologies, thereby lowering costs across industry and enabling wider deployment of CCS in power generation and beyond.  This would likely facilitate the resolution of many other funding and regulatory issues, and also pave the way for geoengineering technologies such as BECCS and DAC.

Indeed, there is already policy movement in this direction.  For example, a controversial draft rule proposed last March by the US EPA would limit all new power plants to emissions of no more than 1,000 pounds of CO2 per MWh of electricity generated.  In order to comply with this proposal, all new coal-fired plants would have to be fitted with CCS.  Such regulatory action would represent a sharp turn away from market-based incentives toward command-and-control instruments, and would assuredly spark a backlash.  But with CCS in its current desultory state, and little progress on the horizon,  performance standards may offer a way to break the CCS cost deadlock.
Posted by Josh Horton at 10:50 AM No comments:

Last week, the Subsidiary Body on Scientific, Technical and Technological Advice (SBSTTA) of the Convention on Biological Diversity (CBD) met in Montreal.  One of its agenda items was consideration of recent reports on scientific, regulatory, and social aspects of geoengineering.  After days of review and discussion, SBSTTA agreed on a recommendation for the Conference of the Parties (COP) to consider in Hyderabad, India this October.  The substance of the recommendation was fairly unremarkable, consisting simply of requests that the convention Secretariat provide future updates on geoengineering to the COP, particularly with respect to the relationship between climate engineering and indigenous peoples and local communities.

However, negotiations leading to this document entailed some significant conflicts over the framing of geoengineering, reflected primarily in the chapeau (introductory text) of the proposed recommendation.  Initial language included reference to the precautionary principle as a possible basis for regulating geoengineering activities.  In international discussions of geoengineering, the precautionary principle has typically been invoked as a rationale for prohibiting research and development.  Presumably in response to the restrictive implications of formally noting the precautionary approach in this context, the Australian delegation expressed its opposition to this language and succeeded in having it bracketed, signifying lack of consensus and the need for further discussion (paragraph 10).  Australia also proposed noting the potential benefits of geoengineering for biodiversity, rather than focusing solely on negative impacts.  The Australians were less successful on this point, as their suggestion was opposed by representatives from Uganda and Norway and was not included in the final text of the recommendation (paragraph 6).

On a more concrete level, the final text includes a request that the IPCC take up the issue of geoengineering as it relates to biodiversity in its fifth Assessment Report (paragraph 14).  This was proposed by the Canadian government, and opposed by the Canada-based, anti-geoengineering ETC Group.  The ETC Group has a long history of involvement with the CBD, is intimately familiar with its institutional machinery, and has a local presence in Montreal (home of the CBD Secretariat).  These factors give ETC Group an advantage in pursuing its agenda within the CBD, which largely explains the group's focus on acting to oppose geoengineering through the Convention, as well as its resistance to transferring relevant deliberations to other bodies where ETC Group has less influence.  In this instance, "ETC Group objected, saying that it would be more appropriate for SBSTTA to provide input on biodiversity in the context of what IPCC does" (p. 11).  Unfortunately for ETC Group, its objection was overridden.

Posted by Josh Horton at 8:35 AM No comments:

This week the Electric Power Research Institute (EPRI), an electric utility industry research organization, published a report on potential new types of emissions offset projects, including two CDR approaches, biochar and ocean iron fertilization (OIF).  The report's authors single out biochar (along with "blue carbon," or coastal carbon sinks) as deserving of further research by EPRI and its member companies, but they are more circumspect with regard to OIF:

While ocean iron fertilization also appears to be a potentially large-scale mitigation option that may also turn out one day to be low-cost to implement, this approach to reducing GHG emissions lacks robust scientific and public acceptance at this time, and fundamental scientific and social issues will need to be addressed before it will be possible to develop these technologies into activities that can generate GHG offsets. (p. 11-1)

More significant than these conclusions is the simple fact that EPRI, an established and well-regarded industry body, is now devoting serious attention to CDR technologies as possible sources of offset credits for future mandatory compliance markets.  It is easy to dismiss interest shown by partisan groups such as the American Petroleum Institute (API).  However, when careful consideration is being given by respected organizations like EPRI, it is a good indication that at least some forms of geoengineering have begun to enter the corporate mainstream.
Posted by Josh Horton at 2:46 PM No comments: