Small Step Forward for Biochar in Australia, Big Step Back for CCS in Canada

The Australian government has announced AUD$2 million ($2.1 million) in new biochar research funding.  Funds will go to support five separate projects, including research conducted by the South Australian No-Till Farmers Association.  According to Federal Agriculture Minister Joe Ludwig, "What's really important is that we use field trials to study the impact, to find how carbon is sequestered into the soil, to be able to demonstrate how successful it can be for farming."

Meanwhile, a showcase CCS project in the Canadian province of Alberta has been abandoned.  The CAD$1.4 billion ($1.4 billion) Pioneer Project would have augmented a new 450 MW coal-fired power plant with an advanced CCS system for use in EOR.  Participants had included TransAlta Corporation, Capital Power Corporation, and Enbridge, Inc., and significant funding was to be provided by both federal and provincial governments.  TransAlta CEO Dawn Farrell explained: "The key for these projects is you need to be close to oilfields that can then use the CO2, and then you have to have enough of a price on the CO2 for the reduction offsets.  And it was those two other pieces that wouldn't work at this time."  Despite this setback, Alberta still plans to move forward with three other CCS projects.
Posted by Josh Horton at 8:56 AM No comments:

From a geoengineering perspective, REDD is most significant with regard to its potential to promote A/R activities.  In practice, however, afforestation and reforestation have figured marginally in efforts to build a REDD architecture.  But a new report from the Rights and Resources Initiative titled The Greener Side of REDD+ makes a strong, straightforward argument for elevating the status of A/R, either within REDD as a "+" component, or outside REDD as a companion mechanism.  Put simply, its authors contend that afforestation, reforestation, and restoration of degraded lands (ARRDL) "is a necessary complement to REDD" (italics original, p. 31):

If REDD is pursued aggressively and successfully, but demand for wood and wood products continues to rise, then REDD alone will not be enough.  That is because, as a country locks up its forests and reduces illegal logging under REDD programs, domestic wood supplies will dwindle and countries will turn to imports, thereby exporting their deforestation and forest degradation, unless the imported wood comes from sustainably managed, oftentimes planted forests. (p. 29)

In other words, REDD without complementary A/R is likely to result in cross-border leakage, essentially transferring deforestation to other countries lacking the capacity to avoid it.  Preventing leakage means finding a sustainable replacement.  And A/R, both domestic and international, is best positioned to provide such a replacement.  Viewed in this light, A/R becomes doubly important as a CDR technique, directly in terms of new carbon sequestered, and indirectly as a backstop for avoided deforestation.  For these reasons, as well as additional co-benefits such as poverty alleviation and biodiversity conservation, A/R deserves prominence far beyond its current role as a minor CDM project type.

(As an aside, this post makes abundantly clear the need to supplement this blog with an acronym list--I plan to add this as a resource in the near future.)
Posted by Josh Horton at 10:07 AM No comments:

Over the past several weeks, three developments have brought the issue of Direct Air Capture (DAC) and Enhanced Oil Recovery (EOR) to the fore.  In February, a new coalition known as the National Enhanced Oil Recovery Initiative (NEORI) presented a series of recommendations to the US Congress intended to spur greater investment in EOR (i.e., the practice of pumping CO2 into depleted fields to extract otherwise inaccessible oil--for more see Global Endorsement of CCS, Including EOR, 11/3/11).  In March, journalist Marc Gunther published an excellent new e-book on the fledgling DAC industry titled Suck It Up, which included a detailed discussion of the links between DAC and EOR.  This was followed by the high-profile Direct Air Capture Summit (DACS) organized by David Keith at the University of Calgary, where EOR again featured prominently as a topic of discussion and debate.

The issue with DAC and EOR derives from the fact that the dominant market for pure CO2 is for use by oil companies in EOR operations.  DAC start-ups such as Carbon Engineering, Global Thermostat, and Kilimanjaro Energy seek to build machines whose primary output is pure CO2 scrubbed from the ambient air.  As such, several of these firms are looking to supply oil companies with CO2 as an initial source of revenue as they develop more advanced and less costly DAC technologies.  To critics, this looks like a "deal with the devil," insofar as it amounts to collaboration with the fossil fuel industry and will lead to GHG emissions that would not have occurred were it not for the additional oil recovered using CO2 supplied by DAC.

This view is both simplistic and impractical.  The reality of DAC today is stated succinctly by Gunther: "air-capture technology has become a solution in search of a market, while its backers wait for the world to get serious about climate threat" (boldface original).  And the reality of the CO2 market today is that it is dominated by demand for use in EOR--there are currently more than 100 EOR projects in operation paying $20-40 per ton of CO2, and the key constraint on future growth is lack of CO2 injectant supply.  Like any other firm, for DAC start-ups to be successful they will need to be financially viable, and the surest road to financial viability in the foreseeable future is supplying CO2 to the EOR market.  Other markets are either too small (for example, greenhouses) or too embryonic (algae-based biofuels), and support from the carbon allowance market is essentially nonexistent.  Right now, EOR is the only meaningful game in town, and represents the only realistic option for DAC technology developers and their financial backers.  To swear off involvement in EOR would deprive DAC of its most powerful motive force, and may well permanently consign DAC technology to the drawing-board.
Posted by Josh Horton at 8:29 AM No comments:

The CDM has officially issued its first carbon credits for an afforestation/reforestation (A/R) project under the Kyoto Protocol. The project in question is a reforestation project in the Brazilian state of Minas Gerais run by the Plantar Group, a company specializing in forestry and iron production. Plantar has reforested 11,600 hectares of degraded land, with a portion of the new plantings converted to sustainable charcoal for use in pig iron manufacturing. In exchange for carbon sequestration and other benefits, the project has received more than 4 million temporary Certified Emission Reductions, or tCERs (under CDM rules, A/R projects are issued temporary CERs due to their potential non-permanence--for more, see BioCF Makes Recommendations for CDM A/R Offsets, 3/14).

The "Plantar Project" is expected to be the first of several A/R projects receiving credits under the CDM this year. CDM regulations permit the issuance of CERs to A/R projects only once per Kyoto commitment period, and the current (first) commitment period ends in December 2012. This rule creates incentives for A/R project developers to delay requesting credits as long as possible in order to maximize the amount of carbon sequestered and hence the amount of carbon credits issued. It is hoped that practical experience gained from these maturing A/R projects will inform the proceedings of the CDM Policy Dialogue, meeting throughout this year with the goal of making recommendations for reform of the CDM.
Posted by Josh Horton at 4:19 PM No comments:

In a post last week (Scotland Aims at CCS for All Coal Plants by 2025), I briefly mentioned the UK government's resurrection of its £1 billion ($1.6 billion) CCS funding program. This funding opportunity, referred to as the "CCS Commercialisation Programme," forms the centerpiece of a newly revamped British CCS policy known as the "CCS Roadmap," about which more information is now available. The CCS Roadmap envisions "widespread deployment of cost-competitive CCS. We are seeking to support the development of a sustainable CCS industry that will capture emissions from clusters of power and industrial plants linked together by a pipeline network transporting CO2 to suitable sites offshore" (p. 6). More specifically, the government proposes to achieve commercialization of CCS facilities in the UK by the 2020s through 5 key interventions:


The CCS Roadmap is accompanied by a detailed Action Plan, shown here. 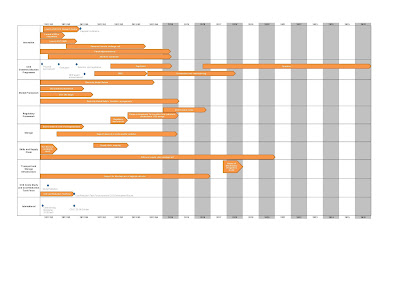 With its new Roadmap, the UK has cemented its place as a world leader in the push for CCS deployment, which is essential for the development of CDR technologies such as DAC and BECCS. Of course, whether CCS is widely adopted in the UK by the 2020s remains to be seen, and there are many obstacles that stand in its way, as demonstrated by last year's failure at Longannet. Nevertheless, DECC and the government deserve credit for redoubling their efforts to support CCS, particularly given the current climate of fiscal austerity.

Posted by Josh Horton at 4:54 PM No comments:

Australia's Chief Scientist, charged with advising the federal government on scientific matters, has released a brief report calling for research on geoengineering. The document is generally unremarkable, highlighting potential advantages and disadvantages of various techniques and underlining possible risks. But its authors conclude by stating, "Scientific research into the usefulness and safety of geoengineering needs to proceed so that the best information is available for policy discussions." The Australian government currently provides limited funding for research related to CCS and carbon farming.
Posted by Josh Horton at 8:53 AM No comments:

Scotland Aims at CCS for All Coal Plants by 2025

On a related note, last week the UK government relaunched its £1 billion ($1.6 billion) CCS funding competition, which had been suspended following the breakdown of talks over the proposed Longannet plant last year (see CCS Stumbles in the UK, 10/30/11).
Posted by Josh Horton at 11:05 AM No comments: