The EU's new 2030 Framework for Climate and Energy Policies, which among other things commits Europe to cut carbon emissions by 40 percent below 1990 levels by 2030, includes a renewal of the NER300 facility.  A new, expanded version will see its endowment increased to 400 million ETS allowances, and funding will now be available to industry applicants.  The UK White Rose CCS Project won 300 million euros in financial support under a previous round of NER300 funding.
Posted by Josh Horton at 3:37 PM No comments:

For those interested, please note that I have begun maintaining a companion Twitter feed @joshuahorton533.  I will continue to post longer blog entries here on occasion, but will use Twitter for shorter updates.
Posted by Josh Horton at 1:25 PM No comments:

There's plenty of politics going on here at CEC14 in Berlin.  The only newsworthy bit, however, comes from Georg Schutte, State Secretary at the German Federal Ministry of Education and Research.  In welcoming remarks on Monday, Schutte stated that it was necessary to consider a "Plan B" in case mitigation and adaptation efforts prove insufficient.  This makes ethical research on climate engineering essential.  International regulation is also essential, but the UNFCCC is not the appropriate forum at present.  The German government, according to Schutte, does not believe that geoengineering should be placed on the international political agenda right now, but is open to helping construct international "guardrails" for geoengineering research.  Scientific research should focus on comprehensive risk assessments, feasible technologies, and demonstrable benefits.  Overall, he said, the German government wants to encourage a serious discussion of climate engineering, but not "pave the way" for eventual deployment.
Posted by Josh Horton at 7:19 AM No comments:

Stringent Conditions for Treating SRM as a Climate Emergency Response?

Under what conditions is it appropriate to treat SRM as a possible response option in the event of a climate emergency?  Given the risks involved, an abundance of caution is warranted.  Here is my sketch of one potential decision tree.  Thoughts?

Some had hoped that EPA would require CCS retrofits for existing coal plants, but cost and other concerns led the agency to pursue a more flexible approach.  Three new legislative proposals, however, would deliver some additional support to CCS.  The Advanced Clean Coal Technology Investment in Our Nation (ACCTION) bill, introduced by Sen. Heidi Heitkamp (D-ND), would provide an additional $2 billion in loan guarantees to CCS projects, increase the existing "45Q" tax credit for carbon sequestration to 30 percent, and create price supports for CO2 used in EOR.

Sen. Jay Rockefeller (D-WV) has introduced his own twin CCS bills.  The Carbon Capture and Sequestration Deployment Act would stabilize the 45Q sequestration tax credit, establish a new investment tax credit covering up to 30 percent of incremental CCS costs, and authorize an additional $20 billion in loan guarantees.  The Expanding Carbon Capture through Enhanced Oil Recovery Act would expand and reform the 45Q tax credit to increase oil production and carbon sequestration via EOR, along lines recommended by the National EOR Initiative (NEORI) two years ago (see DAC and EOR, 4/22/12).
Posted by Josh Horton at 9:24 AM No comments:

IPCC Working Group III released its AR5 report on mitigation last week, and one effect was to give a considerable boost to the visibility and credibility of CDR, in particular BECCS.  It has been less than five years since the Royal Society report was released, and until recently CDR and BECCS were generally unknown acronyms.  Yet now CDR methods have been incorporated into IPCC mitigation scenarios so deeply that, in the view of WGIII, achieving the 2C target (let alone 1.5C) is very difficult without reliance on negative emissions technologies (similar assumptions are now built into UK government scenarios.)  It is worth quoting the Summary for Policymakers discussion of CDR at some length:

Mitigation scenarios reaching about 450 ppm CO2eq in 2100 [i.e., 2C] typically involve temporary overshoot of atmospheric concentrations, as do many scenarios reaching about 500 ppm to 550 ppm CO2eq in 2100.  Depending on the level of the overshoot, overshoot scenarios typically rely on the availability and widespread deployment of BECCS and afforestation in the second half of the century.  The availability and scale of these and other Carbon Dioxide Removal (CDR) technologies and methods are, to varying degrees, associated with challenges and risks … CDR is also prevalent in many scenarios without overshoot to compensate for residual emissions from sectors where mitigation is more expensive (p. 15).

As the summary notes, there are real risks associated with BECCS and other NETs, such as potential land-use and food security issues related to biomass cultivation.  But there are serious risks associated with surpassing 450 ppm, arguably bigger risks than those connected to most CDR techniques.  In the end, climate policy involves risk trade-offs, whether those trade-offs apply to mitigation, adaptation, geoengineering, or all three.  The IPCC has done policy-makers a great service by emphasizing the significant risks entailed in not taking BECCS and other forms of CDR seriously.
Posted by Josh Horton at 10:59 AM No comments: 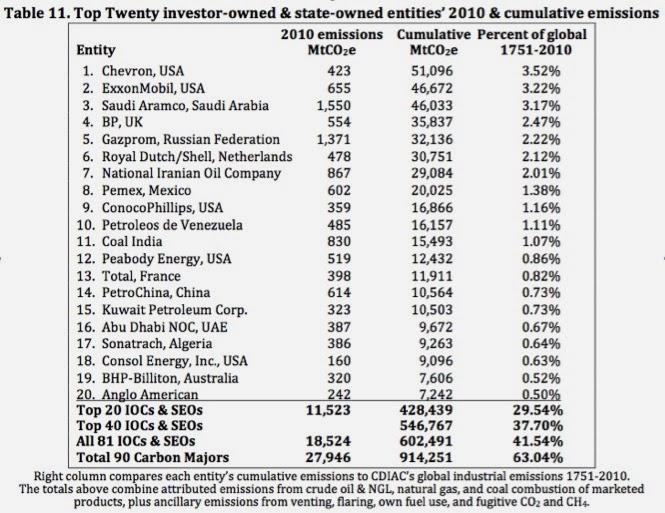 This is hardly a definitive assessment of the carbon legacy of coal, oil, and gas producers, but it is a good start, and provides a valuable quantitative estimate of contributions to cumulative carbon and methane emissions.  Such estimates could conceivably form the basis of formulas to determine "carbon major" contributions to a solar geoengineering liability compensation fund.
Posted by Josh Horton at 6:30 AM 2 comments: